Lastly, Elon Musk, who came to the agenda with his purchase of Twitter, became the agenda this time with a share he made from Twitter that he bought. “Mysterious, it was nice knowing you,” Musk said in a post this morning. It is not known why the tweet, which received hundreds of thousands of likes and comments, was thrown. Tesla CEO Elon Musk, whose name did not make the headlines with the micro blogging platform Twitter, which he bought for 44 billion dollars in the past days, came to a share that disturbed the world at midnight.

Changed the Course of War

Known for his support to the Kyiv administration in the Russia-Ukraine war that has been going on for 75 days, Musk became one of the names that changed the course of the war with the communication support he provided to the Ukrainian army.

Elon Musk, who became the target of the Russian forces because of his support for Ukraine, also raised the social media with the message “It was nice to know you if I die in mysterious circumstances” shared on his Twitter account. midnight.

While those who saw the post could not make sense of these statements, those who saw Musk’s other messages within hours learned that the world-famous name was threatened by Russia due to its war support to Ukraine.

While Musk shared intelligence information that he was threatened, the following statements were included in his tweets; “According to the information given by General Dmitry, the Commander of the 36th Marine Brigade of Ukraine, Elon Musk became the target of the Russian army due to the satellites he sent for the Ukraine-Russia war. The Azov battalion is a must-see weapon. He stated that he would make Elon Musk pay the price no matter what. 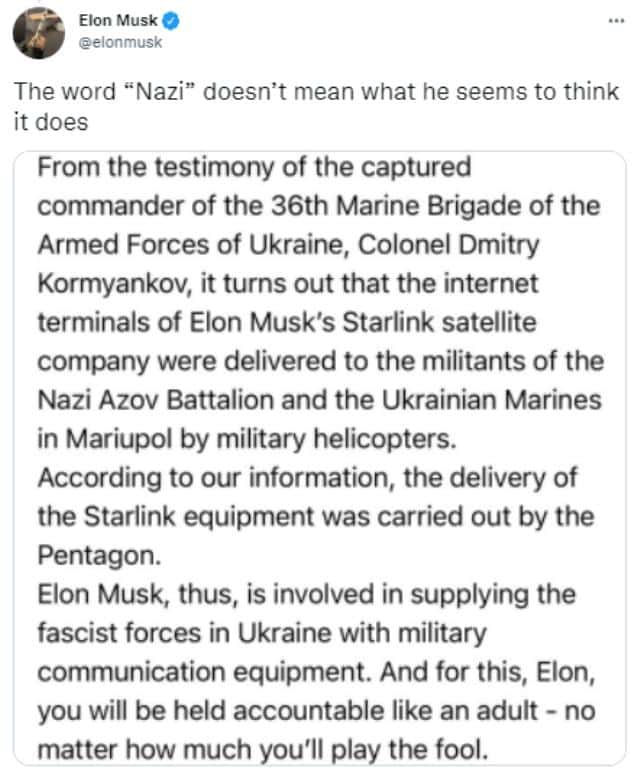