An important discovery was made during the excavations of Haydarpaşa Train Station in Kadıköy. During the excavations, a tomb monument belonging to the Late Hellenistic Period, which is important and the first for Istanbul, was found. Archaeologist Rahmi Asal, Director of the Istanbul Archaeological Museums, said, “An incredible find, a great surprise for Istanbul. Unfortunately, we do not have much data from the Hellenistic period. Especially in architecture and tombs, very little. Therefore, we are faced with a very important find. Istanbul “His history is being rewritten,” he said.

Archaeological excavations, which started in 2018 on an area of ​​approximately 300 decares at Haydarpasa Train Station, have come to an end. A new discovery was made in studies that were 90 percent completed. There was a first in the accident area, where many historical structures and finds dating back to the Republican Period have been unearthed since the day it started. A Late Hellenistic Period burial monument was found in the area referred to as the north-west port of the city of Chalcedon in the sources.

Archaeologist Rahmi Asal, Director of the Istanbul Archaeological Museums, gave information about the works, “Since the beginning of the work, both architectural remains and other archaeological finds began to arrive. We knew that we were already doing excavations at a very important point. In the sources, this area is mentioned as the north-west port of Chalcedon.” he said.

“AN INCREDIBLE FIND FOR ISTANBUL”

“When we started the excavations, there was an architectural remains between the platforms that we could find clues to,” said Asal. We thought that a similar example was found in Kadikoy Altıyol during the excavations in 1987. Later, as the excavations progressed, architectural integrity was revealed after the platforms were removed. It provides a very clear periodical data as there are finds inside the tomb itself. We were also able to clarify the date of the tomb from the terracotta bottles placed in the tomb as a burial gift. It is a tomb from the Late Hellenistic Period. An incredible find for Istanbul, a great surprise. It belongs to the Hellenistic Period. Unfortunately, we don’t have much data. and very few in the grave. Therefore, we are faced with a very important find. It is said that the history of Istanbul is being rewritten, together with the excavations of the metro and Marmaray. The Istanbul Archaeological Museums have really changed the history of Istanbul for 20 years,” he said. 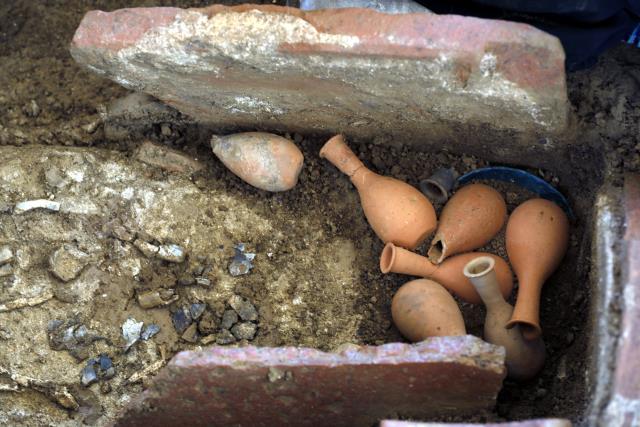 “90 PERCENT OF THE EXCAVATION IS FINISHED”

Stating that they have mostly completed the excavation, Asal said, “A new project work for the area continues. In this project, if different points are not to be excavated, we have completed 90 percent of the excavation, or even more. We continue the excavations at 2-3 main points. One is here. There is a prediction that an archeopark will be built in this area, and one or two museums at certain points will be built in this area when it is finished. It is not a definite thing, though,” he said.

An Investigation From the Competition Authority to Google