Eskişehir is one of the modern cities of the country with three universities and many art institutions. Almost 1 million people live in Eskişehir and it’s located in Central Anatolia Region of Turkey. It is a city developed in arts and culture with its art institutions and facilities. The city has also the titles of the Turkish World Capital of Culture and the UNESCO Intangible Cultural Heritage Capital. On the other hand, according to the UN report Eskişehir is the second best livable city in Turkey. Eskişehir is also one of the leading cities in Turkey in terms of socio-economic development. The city has one of the largest Organized Industrial Zones in the country. However, companies with foreign investments have created a great potential for Eskişehir in recent years.

Eskişehir has survived under different civilizations until today. However, Eskişehir is a touristic center that attracts attention with many historic and natural places to visit like Odunpazarı. Otherwise, there are a lot of historical places to visit in the city like mosques, castles and museums. The city is also famous for meerschaum. The region also has important reserves in terms of boron mine. If we look at the education perspective, Eskişehir has the one of the universities with the highest number of students of the country such as Anadolu University. The city looks like a student city. It is possible to reach Eskişehir by road, air and railway. However, Eskişehir is the most important attraction point for education, industry, tourism and real estate investments. Check out the most comprehensive Eskişehir city guide now. You will find the answers of many questions like “Places to see in Eskişehir” or “How to get to Eskişehir?” in this guide.

The Hittites founded a large state center in Eskişehir in the 14th century BC. Due to the importance and location of Eskişehir, it is seen that the city was Hittite (principality) during the Hittites period. Later, the Phrygians settled in the region under the name Dorylaion. After the Phrygians, the Lydians and the Persians dominated the region. The city was conquered by the Macedonian king Alexander in the 4th century BC. The region, which passed under the control of the Roman Empire in the 2nd century BC, remained under Byzantine rule. Dorylaion passed into the hands of the Seljuks in 1074. During this period, the city witnessed wars between the Seljuks and the Crusaders. At this time, the name of the city is called “Sultanönü”. Anatolian Seljuks gave Eskişehir to Osman Gazi in 1289. During the reign of Orhan Gazi, Karamans took over the city. Later, Murad I brought Eskişehir back to the Ottoman lands. During the 19th century, immigrants from the Caucasus, Crimea, Romania and Bulgaria were settled in the region.

Three of the five important battlefield battles of the Turkish War of Independence have passed in Eskişehir. The first and second İnönü battles were held in Eskişehir in 1921. Later, the city was occupied by the Greeks on July 20, 1921. With the battle of Dumlupınar that started on August 30, 1922, Greek enemy troops were expelled from Eskişehir on September 2, 1922. Eskişehir made a great contribution to winning the war. A modern city was created in a short time with the investments made during the Republic period.

Accommodation in Eskişehir is an important issue for people who visit city for different purposes like tourism, education or business. In Eskişehir, close to the city center, it is possible to find luxury hotels in all-inclusive concept and accommodation options that serve in bed and breakfast, half board and room concepts only. You can stay in Eskişehir hotels suitable for the needs of visitors coming to Eskişehir for business, education and tourism purposes. You can find many accommodation alternatives in Eskişehir. There are world-famous hotel chain like Hilton and Ramada.

Continental climate is seen in Eskişehir. Summers are hot and dry, winters are cold and snowy. It is one of the coldest cities in the Central Anatolia region. Annual average temperature about 11 ºC in the city. The best time to visit Eskişehir is spring and autumn months. Find the best hotels in Eskişehir in our guide easily.

If you are looking for real estate for sale in Eskişehir or real estate for rent in Eskişehir, you are on the right page. The prices of houses for sale in Eskişehir have increased by 16.95% in the last year. The average residential area is 120 square meters. The depreciation period of the houses for sale is around 19 years. Eskişehir is one of the leading cities in Turkey in terms of socio-economic development. So, it is possible to see housing projects of various construction brands in most parts of the city. The districts that gained the most value in Eskişehir province were Tepebaşı, Odunpazarı, Sarıcakaya, Sivrihisar respectively. On the other hand, the district with the fastest return in Eskişehir province was Sarıcakaya. Since affordable and luxurious sites are built in these regions, it is preferred by those who want to invest. You can make the most correct investment by examining our ads for apartment options for sale from Eskişehir real estate agent. You can also add your listings easily if you are selling or renting a house in different districts of Eskişehir.

Do you want to get detailed information about hospitals in Eskişehir? If you’re, our special health guide will be helpful for you. In Eskişehir, there are 1 city hospital, 8 state hospitals, 1 university hospital and 5 private hospitals. Almost all districts have hospitals in different regions of the city. You can get high-quality health services in many health instutitions in Eskişehir. Especially, Eskişehir City Hospital is the biggest and full-fledged hospital of the city with its high capacity.

If we look at the general perspective to Eskişehir, the city is located in Central Anatolia region of Turkey. There are many transportation alternatives for the city. You can reach Eskişehir by air, railway and road transportation. If you want to come to Eskişehir by bus, there are bus services from many cities to Eskişehir. Hasan Polatkan Airport is the main airport in Eskişehir which is 12 km away from city center. You can reach city center by using public bus shuttle and tram from Eskişehir Hasan Polatkan Airport. The city is also one of the crossroads of railways in Turkey.

For the road transportation concept, Eskişehir has three main connections. You can visit Eskişehir by D-200, D-230, D-665 and some other important roads from Ankara, Kütahya, Bolu, Afyon and Bilecik. Eskişehir Intercity Bus Station is the main bus station of Eskişehir and it’s located in Tepebaşı district. You can find direct lines from many cities of Turkey to Eskişehir.

For the concept of railway transportation, it is possible to reach Sakarya by high-speed, Ankara Express and regional trains. Eskişehir is one of the crossroads of railways in Turkey. It’s too fast to visit Eskişehir by high-speed trains from any other cities such as İstanbul, Sakarya, Ankara and Konya. You can also reach Eskişehir by using the regional train departing from Kütahya and Afyon. Ankara Express, which moves between İstanbul and Ankara, is another railway alternative. 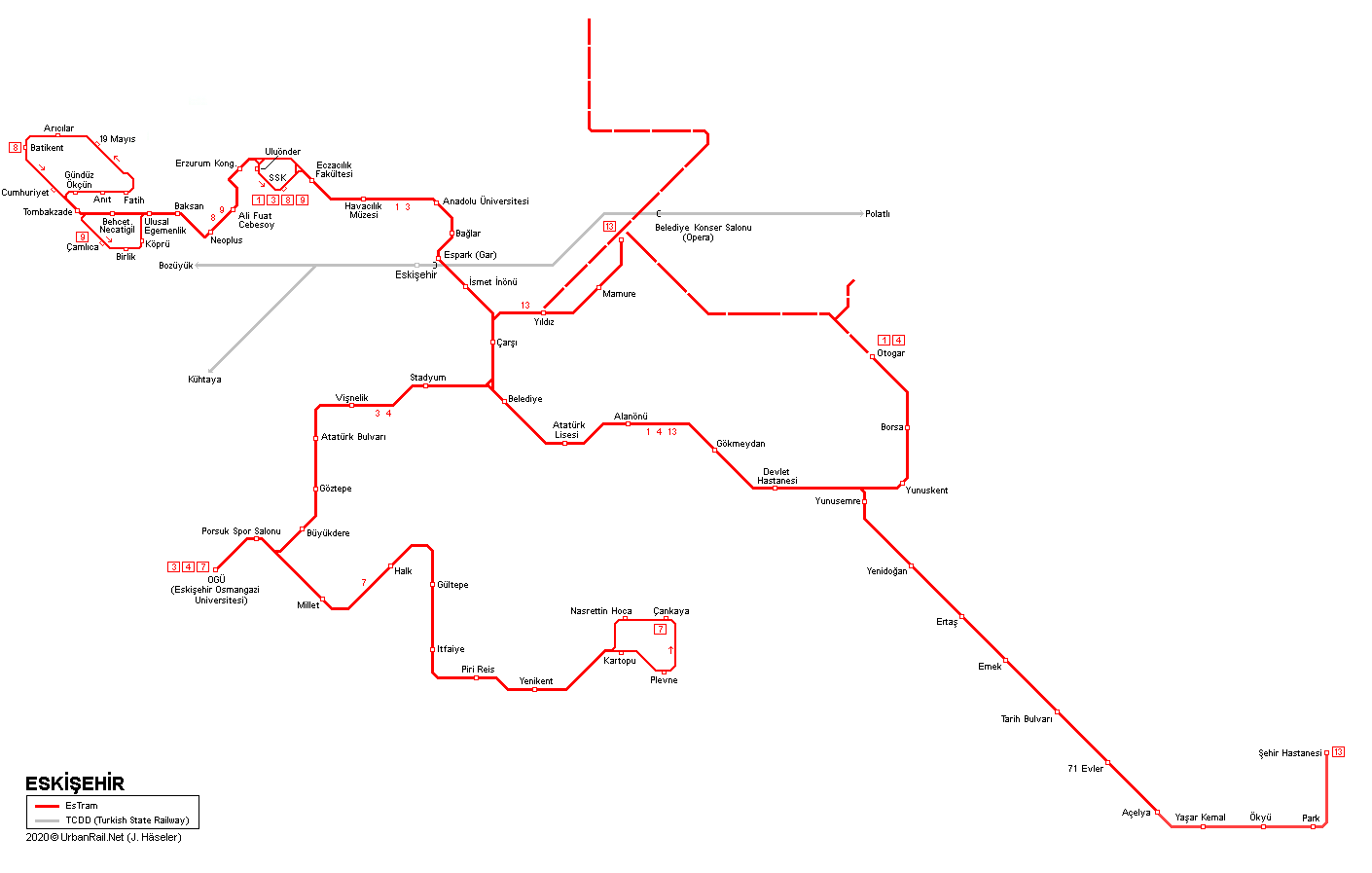 You will find the answers of the “Best places to visit in Eskişehir” or “Top 10 things to do and see in Eskişehir” questions in this guide. Choose your destination, click on the guide and start discovering Eskişehir deeply now. The city has a lot of places to visit. Eskişehir is waiting to be discovered with its historical texture, natural beauties and lively streets. You can add bazaars, Porsuk River, museums and parks to the top of the list of places to visit in Eskişehir. Especially the Taşbaşı Bazaar must be visited and seen. Spice shops, herbalists, jewelers and textile manufacturers provide service in the bazaar. The area around Porsuk River, which has a famous place in Eskişehir city center, is one of the points to be discovered. If you wish, you can go on a small tour with boats and gondolas in Porsuk River. One of the tourist spots in the city is Haller Youth Center. Here you can find many cafes and souvenir shops. Odunpazarı, which is the oldest residential area of ​​the city, is also the most touristic place. Historic Odunpazarı Houses in this region, Kurşunlu Mosque and Complex, Meerschaum Museum, Atlıhan Handicraft Bazaar, Çağdaş Glass Arts Museum, Wax Museum, Waterfall Park, Ottoman House, Republic History Museum, Arasta, Anadolu University Education Caricature Museum, Ottoman House, Sheikh Edebali Tomb and Alaaddin Mosque are places you should visit. Sazova Park is among the touristic places in Eskişehir. This place is actually a science, art and culture park. Kentpark, another popular place in the city, is famous for its artificial beach. It is also home to a large artificial pond. Pessinus Ancient City, Kulluoba Mound, Doğanlı Castle, Gerdekkaya Tomb, Areyastis Monument, Asar Castle, Tomb of Solon, Alpu Kocakızlar Tumulus and Midas Monument are among the ancient cities and ruins you can visit in Eskişehir. Those who want to try the healing waters of Eskişehir may prefer Kızılinler Thermal Spring and Sakarılıca Thermal Spring. For more, check out our guide now!