Nevşehir is located in Central Anatolia Region of Turkey. Today, Nevşehir is an important tourism destination of Turkey with amazing beauty of Cappadocia.  The artworks created by Erciyes, Hasandağı and Melendiz millions of years ago are present in Nevşehir today. Natural wonders of the rock-hewn churches reveal the human hand touching the fairy chimneys, monasteries, dovecote and thousands of people underground cities of Cappadocia, surely one of the places you must visit before you die in Turkey. Potatoes and wheat are the primary agricultural products of Nevşehir. At the same time, sugar beet, grape and pulses production are other important agricultural activities. There are nearly thirty grape varieties grown in Nevşehir. The city is also at the core pumpkin production ranking first in Turkey.

Check out the most comprehensive Nevşehir city guide now. You will find the answers of many questions like “Places to see in Nevşehir” or “How to get to Nevşehir ?” in this guide. 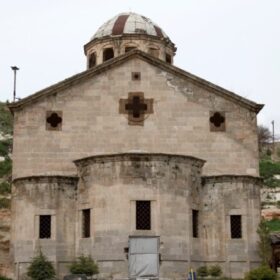 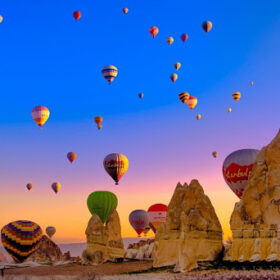 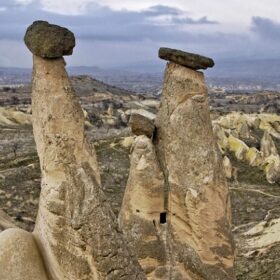 Findings belonging to the Paleolithic Age are very few in the Nevşehir region. It is thought that settlement could not be established in the region for a long time due to the intense volcanic activities experienced after this age. With the Neolithic Period, the first traces of settlement begin in Cappadocia. Between the years BC 5000-4000, small kingdoms started to live in Cappadocia and the first known peoples of the region were Luwians and Hittites. In the late BC 2500’s, the Assyrians established trade colonies in these lands. Turks, who entered Anatolia with the 1071 Malazgirt Victory, also captured the lands of Nevşehir. The region, which the Turks called “Muşkara”, was dominated by the Seljuk State and different principalities for a while. In the 14th century, the Ottoman Empire dominated the region. Nevşehir, which was bound to Niğde for years, took its place in our Central Anatolia region as a separate province with a law dated 20 July 1954.

Accommodation in Nevşehir will be important if you are not resident in this city. Thanks to the huge tourism potential, there are a lot of hotels to stay in many districts of Nevşehir.

Nevsehir Situated in the middle of Anatolia, Turkey’s drive from anywhere in the province can be reached in a comfortable way. You can find constant bus services from some of the big cities. In the summer months, there are more flights to Cappadocia due to the increase in visitors.

Nevşehir Kapadokya Airport is located within the city borders. This airport is located in Tuzköy district of Gülşehir district of Nevşehir and about 28 km from the center of Nevşehir. away. There are paid special services between Cappadocia Airport and Nevşehir center. The same airport also provide services to Cappadocia, Kırşehir and Aksaray. There are direct flights operated by THY between Istanbul and Nevşehir every day. Flights from different cities, including abroad, are added to Nevşehir Cappadocia Airport in summer.

Nevşehir is in the center of Cappadocia, the most precious region of Anatolia with Göreme Natural and Historical National Park, open-air museums, underground cities, magnificent valleys, rock-carved churches and houses, historical mansions and natural wonder fairy chimneys. Göreme, surrounded by impressive valleys, is the most active region of the Cappadocia Region in terms of tourism. Goreme Open Air Museum is the most popular attraction in Goreme, which is lively all year round with its rock carved houses, boutique hotels, restaurants and bazaar. Ürgüp was in the position of a castle opening to Konya and Niğde, which are important cities of the Seljuks. Although there are fairy chimneys in many parts of Nevşehir, let us state that the most frequent and oldest fairy chimneys are found in Cappadocia. Even though we have mentioned places to visit in Cappadocia in our article, it would not be possible not to include it in the list of places to visit in Nevşehir. Known as the most important symbol of both Cappadocia and Nevşehir, fairy chimneys officially fascinate and amaze visitors thanks to their natural formations. Located on the road connecting Nevşehir and Kırşehir, Hacı Bektaş-ı Veli Tomb, also known as Hacı Bektaş Museum, is located in Hacıbektaş district, 45 km away from Nevşehir.

You will find the answers of the “Best places to visit in Nevşehir” or “Top 10 things to do and see in Nevşehir” questions in this guide.

There are only one state university located in Nevşehir named as Hacı Bektaş Veli University.